Q-learning is a reinforcement learning (RL) algorithm that is the basis for deep Q networks (DQN), the algorithm by Google DeepMind that achieved human-level performance for a range of Atari games and kicked off the deep RL revolution starting in 2013-2015.

We begin with some historical context, then provide an overview of value function methods / Q-learning, and conclude with a discussion of DQN.

If you want to skip straight to code, the implementation of DQN that we used to train the agent playing Atari Breakout below is available here.

If you watch the video long enough, you’ll see the agent has learned a strategy that favors breaking bricks at the edges so the ball “breaks out” to the upper side, resulting in a cascade of points.

The theories that underpin today’s reinforcement learning algorithms were developed decades ago. For example, Watkins developed Q-learning, a value function method, in 1989, and Williams proposed the REINFORCE policy gradient method in 1987. So why the recent surge of interest in deep RL?

Until 2013, most applications of RL relied on hand engineered inputs for value function and policy representations, which drastically limited the scope of applicability to the real world. Mnih et. al [1] made use of advances in computational power and neural network (NN) architectures to use a deep NN for value function approximation, showing that NNs can learn a useful representation from raw pixel inputs in Atari games.

The basic RL algorithms that were developed decades ago do not work well in practice without modifications. For example, REINFORCE relies on Monte Carlo estimates of the performance gradient; such estimates of the performance gradient are high variance, resulting in unstable or impractically slow learning (poor sample efficiency). The original Q-learning algorithm also suffers from instability due to correlated sequential training data and parameter updates affecting both the estimator and target, creating a “moving target” and hence divergences.

We can think of these original RL algorithms as the Wright Brothers plane. 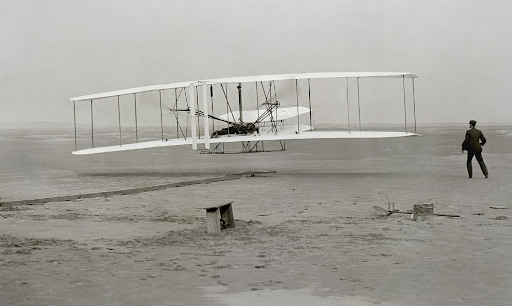 The foundational shape is there and recognizable in newer models. However, the enhancements of newer algorithms aren’t just bells and whistles — they have enabled the move from toy problems into more functional territory.

RL models the sequential decision-making problem as a Markov Decision Process (MDP): transitions from state to state involve both environment dynamics and an agent whose actions affect both the probability of transitioning to the next state and the reward received.

The goal is to find a policy, a mapping from state to actions, that will maximize the agent’s expected returns, i.e. their cumulative future rewards.

Q-learning is an algorithm for learning the eponymous \(Q(s,a)\) action-value function, defined as the expected returns for each state-action \((s,a)\) pair, corresponding to following the optimal policy.

Recall that \(q_*\) is described by a self-consistent, recursive relation, the Bellman optimality equation, that falls out from the Markov property [6, 7] of MDPs

Our introduction to RL provides more background on the Bellman equations in case (\ref{action-value-bellman-optimality}) looks unfamiliar.

The Q-learning approach to solving the Bellman equation

We use capitalized \(Q\) to denote an estimate and lowercase \(q\) to denote the real action-value function. The Q-learning algorithm makes the following update:

The goal with Q-learning is to iteratively calculate (\ref{q-learning}), updating our estimate of \(Q\) to reduce the Bellman error, until we have converged on a solution.

I. It replaces the expectation value in (\ref{action-value-bellman-optimality}) with sampled estimates, similar to Monte Carlo estimates. Unlike the dynamic programming approach we described in an earlier post, sampling is necessary since we don’t have access to the model of the environment, i.e. the environment transition dynamics.

II. It replaces the target \(R_{t+1} + \max_a \gamma q_*(s’,a’)\) in (\ref{action-value-bellman-optimality}), which contains the true action-value function \(q_*\), with the one-step temporal difference, TD(0), target \(R_{t+1} + \gamma \max_a Q(S_{t+1}, a)\). The TD(0) target is an example of bootstrapping because it makes use of the current estimate of the action-value function, instead of, say the cumulative rewards from an entire episode, which would be a Monte Carlo target. Temporal difference methods reduce variance that comes from sampling a single trajectory like Monte Carlo at the cost of introducing bias from using an approximate function in the target for updates.

Figure 8.11 of [7] nicely summarizes the types of approximations and their limits in the following diagram: The DQN authors made two key enhancements to the original Q-learning algorithm to actually make it work:

These modifications enabled [1] to successfully train a deep Q-network, an action-value function approximated by a convolutional neural net, on the high dimensional visual inputs of a variety of Atari games.

The authors also employed a number of tweaks / data preprocessing on top of the aforementioned key enhancements. One preprocessing trick of note was the concatenation of the four most recent frames as input into the Q-network in order to provide some sense of velocity or trajectory, e.g. the trajectory of a ball in games such as Pong or Breakout. This preprocessing decision helps uphold the assumption that the problem is a Markov Decision Process, which underlies the Bellman optimality equations and Q-learning algorithms; otherwise, the assumption is violated if the agent only observes some fraction of the state of the environment, turning the problem into a partially observable MDP.

The Cartpole problem is trainable on the average modern laptop CPU, but we recommend using a beefier setup with GPUs and lots of memory to do Q-learning on Atari. Thanks to the OpenAI Scholars program and Microsoft, we were able to train DQN on Breakout using an Azure Standard_NC24 consisting of 224 GiB RAM and 2 K80 GPUs.

The values from the \(Q\) estimator and frozen target network are fed into the Huber loss that is used to update the parameters of the Q-function in this code snippet:

The experience replay buffer was taken from OpenAI’s Spinning Up in RL [6] code tutorials for the problem:

You can see logs and plots like this plot of the mean raw returns per step in the environment for the Atari DQN training run in our wandb dashboard. From a pedagogical point of view, Q-learning is a good study for someone getting off the ground with RL since it pulls together many core RL concepts, namely:

DQN on top of vanilla Q-learning itself is noteworthy because the modifications — experience replay and frozen target networks — are what make Q-learning actually work, demonstrating that the devil is in the details.

Furthermore, the DQN tricks have been incorporated in many other RL algorithms, e.g. see [6] for more examples. The tricks aren’t necessarily “pretty”, but they come from understanding/intuition about shortcomings of the basic algorithms.