In this post, I explore some basic math behind the World Wandering Dudes framework previously introduced in this post.

For the purposes of this post, to make the modeling simpler, we introduce the following properties:

First, let’s imagine a single creature alone on the field. After taking \(N\) steps, the creature will explore \(N_{unique}\) unique sites on the lattice, where \(\langle N_{unique} \rangle \sim N^\beta\), with \(\beta \approx 0.87\) (see this post for more details). The number of food that this creature will gather by the end of the day is \(x \sim \text{Binom}(N_{unique}, \rho_{food})\). We’ll represent the probability the creature gets \(x\) food as 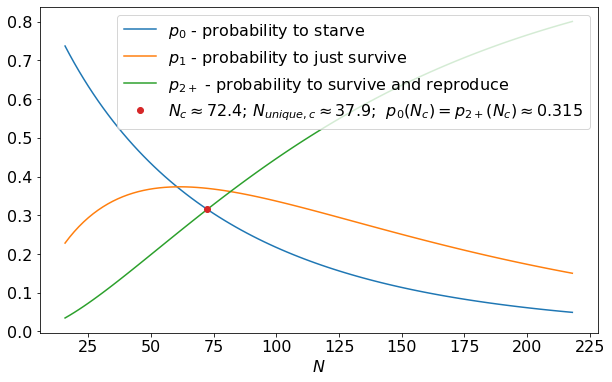 A couple of interesting notes:

We can reproduce \(N_c\) from the simulation framework as well. We ran numerous simulations, holding \(\rho_{food} = 0.03\) constant and varying \(N\) for a few creatures (code here). For each \(N\), we plot the fraction of simulations that still had creatures after 200 days: 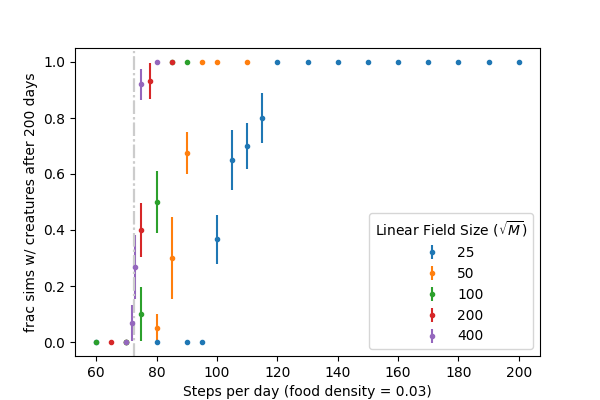 For sufficiently large fields, the transition from long-term survival to population collapse is sharp at \(N_c(\rho_{food} = 0.03) \approx 72\) as predicted by the binomial probabilities above, creatures that walk longer than this survive and multiply, creatures that walk shorter, die off. Smaller fields show propensity for population collapse at even higher \(N\) which can be attributed to inherent instability of relatively small populations (\(n < 10\) or so).

We can extend this understanding to a population of \(n\) creatures: Based on the rules outlined at the beginning of the post, the number of creatures on day \(i+1\), \(n_{i+1}\), will be:

However, if the creatures are thriving, they will multiply to the point that they are no longer in isolation and start to “steal” each other’s food. This will then curb the population’s growth. To explore this, for simulations with creatures that survived their first 200 days, we look at the average number of creatures on the field from day 100 to 200 (to isolate the equilibrium condition). We plot \(\langle n \rangle / \rho_{food} M\) (average creatures as a fraction of the daily food sprout rate): 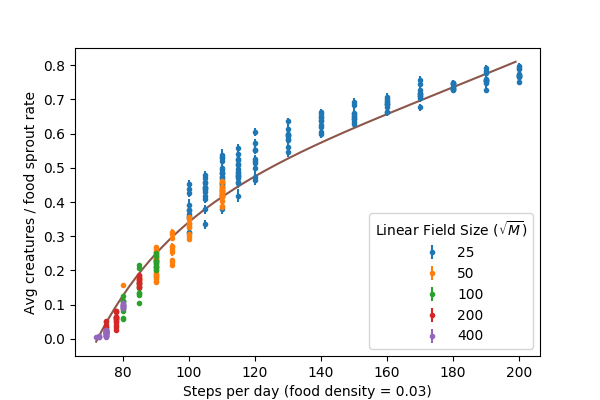 The trend generally makes sense, creatures with longer walks gather more food and can maintain larger populations. Near the critical point \(N_c\), the stable populations are very low relative to the amount of food on the field, but they are stable (for sufficiently large fields). In this case, interactions between creatures are rare occurrences, but there are enough to keep the population from growing at the very slow rate that it would if all its creatures were in isolation (\(p_{2+}\) is only marginally larger here than \(p_0\)).

The remainder of this post is a discussion of the theoretical line in the figure above.

In order to approximate the impact of creature food “stealing” on the equilibrium population level, we must return to equations (\ref{birthdeath}) and add a term to account for these interactions to each. Some creatures that would have otherwise reproduced will lose this ability due to displaced food. Likewise, some creatures that would have barely survived will die. As an approximation, we’ll only model the impact on creatures that would have gotten exactly 1 (or 2) food as these creatures are the most at risk of losing the ability to survive (or reproduce) as a result of food displacement. The probability of the average creature having an interaction with one of the other creatures scales as \( n_{i} (\langle N_{unique} \rangle/M)\) (the number of other creatures times their relative footprint on the field), So, we can modify equations (\ref{birthdeath}), reducing births and supplementing deaths:

where \(A\) is some constant of proportionality having to do with some of the geometry of the system and the fraction of food displaced as a result of the average interaction.

Again, equilibrium will be reached when the two quantities in equations (\ref{birthdeathint}) are equal, which leads to a unique solution for the average number of creatures at equilibrium:

This discussed model has some limitations:

The model is thus not correct, but simple and captures the core of the problem. It reminds me vaguely of the Flory approximation in polymer physics (see discussion here).